Skip to main content
< BACK TO CURRENT GRADUATE STUDENT DIRECTORY 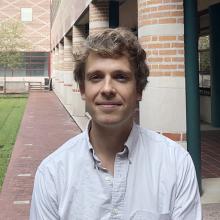 Henry McMahon studies 20th century European and American painting, with a focus on French painting in the interwar and postwar periods. His primary research interests are on painters associated with the CoBrA, art informel and Situationist movements. During the 2020-21 academic year, he will serve as the John and Dominique de Menil Fellow at the Menil Collection.