“The Autonomous Camera: Assayas and Movement” 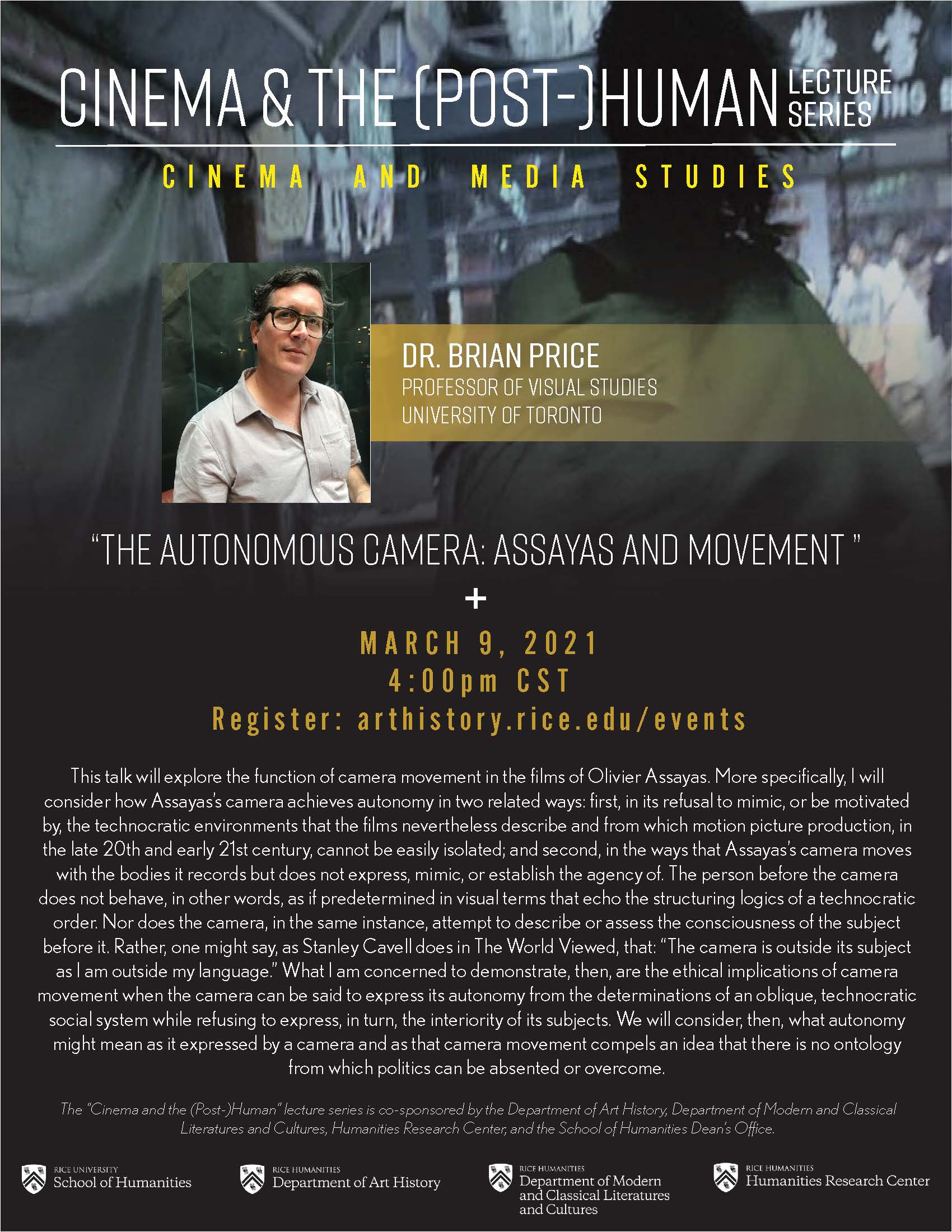 The Cinema and Media Studies lecture series, "Cinema and the (Post-)Human," will next feature Dr. Brian Price, Professor of Visual Studies at the University of Toronto. Professor Price is especially interested in the aesthetic dimension of moral and political philosophy, particularly as those modes of inquiry are expanded by the varied forms of the moving image, avant-garde and popular and the history of film theory.

This webinar is free and open to the Rice community and public. Zoom registration is required.

The Autonomous Camera: Assayas and Movement

This talk will explore the function of camera movement in the films of Olivier Assayas. More specifically, Prof. Price will consider how Assayas’s camera achieves autonomy in two related ways: first, in its refusal to mimic, or be motivated by, the technocratic environments that the films nevertheless describe and from which motion picture production, in the late 20th and early 21st century, cannot be easily isolated; and second, in the ways that Assayas’s camera moves with the bodies it records but does not express, mimic, or establish the agency of. The person before the camera does not behave, in other words, as if predetermined in visual terms that echo the structuring logics of a technocratic order. Nor does the camera, in the same instance, attempt to describe or assess the consciousness of the subject before it. Rather, one might say, as Stanley Cavell does in "The World Viewed," that: “The camera is outside its subject as I am outside my language.” What Dr. Price is concerned to demonstrate, then, are the ethical implications of camera movement when the camera can be said to express its autonomy from the determinations of an oblique, technocratic social system while refusing to express, in turn, the interiority of its subjects. And while the camera’s refusal to do more than acknowledge the subject before it suggests an affinity between Assayas’s camera and Cavell’s ontology, the first condition—the camera’s refusal to express the logics of the world it nevertheless describes—suggests, perhaps, something less expected: namely, that the ontology of film is necessarily a political ontology, and perhaps, that every ontology is a political ontology. We will consider, then, what autonomy might mean as it expressed by a camera and as that camera movement compels an idea that there is no ontology from which politics can be absented or overcome.
-------------
Brian Price is Professor of Visual Studies at the University of Toronto. He is the author of "A Theory of Regret" (Duke UP, 2017) and "Neither God nor Master: Robert Bresson and Radical Politics" (University of Minnesota Press, 2011). He is a founding editor of "World Picture," and also the newly appointed editor of a book series at Northwestern University Press, entitled "Superimpositions: Philosophy and the Moving Image." He is currently finishing a book entitled, "Assayas and Political Seriousness," from which this talk is drawn.